oh hai guys. i forgot to mention that while i'm not playing the sims, i'm going to be using the journal

tinykat asked to see a recent picture of Cinatra. HERE YOU GO:

Sooty is the added bonus. They're best friends. You won't find Sooty without Cinatra!

i'm only going to write a short update because right now i feel like poop and it's just doing my head in and i just want to snuggle up to my teddy bears and listen to family guy (yes listen, i don't actually watch it, but i can't fall asleep without something playing in the background and music doesn't cut it)

on sunday queensland (where i live) was hit with a really big storm. my side of town got it the worse. basically, the trees down the back are all split in half, but thankfully didn't fall on us, we had a few tiles missing from our roof which mean we had water seeping through, my fathers boat was turned upside down on our driveway, only moving a little because the engine got caught. if we didn't have an engine on it i'm pretty sure it would have crashed through my window (driveway is right outside my window) our pool had another pool outside of it and we were without power for 25 hours. my area got it pretty bad, but the area a few blocks away from me got it worse off. some people are without houses.

the reason i am feeling like poop is because sooty being the smart cat that he is, was in the thick of the trees down the back that were split and i spent an hour looking for him in the rain. i have a really shithouse (weak) immune system and so i have now come down with a cold. i have aches and pains everywhere and my head feels like it's about to explode.

sorry for no puncuation.. i am falling asleep and i know that if i tried to capitalise i will just make typos. i am forever backspacing right now.

on the other side- i'm going to start playing sims again soon, so expect an update of some sort. perhaps the rainbow challenge.. only i might change the colors so i won't be following the rules. i'm not sure. bahhhh hands are sore now.

Long story short: I broke up with the boyfriend today and he's not taking it very well.

Him: Now there no fuckin need 2 be so immature, you never do anyone any good dunno how u can sleep at nite when u take advantage of peoples good nature, u don't even deserve tha roof over yaw head and you've got such a great life and u don't even realise it. What was i thinkin' being with u, yaw so pathetic its not funny. U need 2 step outside tha box and face tha real world darlin' not sittin around playin ya laptop u don't know how good ya got it.

Him: Yeah u would laugh wouldn't ya or did i hit tha nail on tha head and thats all you had 4 a reply, ya gonna have 2 do better than that 'darlin'

WILL KEEP YOU POSTED IF I LMAO.

Him: Your pathetic, what makes u be tha way u are

Me: LMAO!! Black, its what the kettle is being called!

Since my big boy is sitting with me in my room right now, I thought I'd show those who remember my cats first litter and remember that I kept one- black with some brown coloring here and there.

katu fell in love with him and I haven't been able to get many good pics of him because he's always galavanting around. The picture of him now behind the cut isn't that great because it's nighttime here and on my printer is the only place he'd stay. So have a gander at baby Sooty and now semi grown up Sooty!

1. Reply to this post, and I will pick five of your icons.
2. Make a post (including the meme info) and talk about the icons I chose.
3. Other people can then comment to you and make their own posts.
4. This will create a never-ending cycle of icon squee

Little Cinny is growing up! Today she is 3 weeks old. Her eyes are open, she's getting more character about her and she's starting to play! So.. of course I took pix! 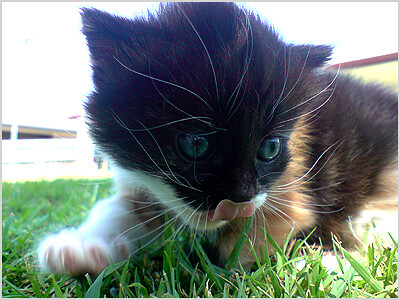